5 Best Microphones Under $100 for Recording Vocals 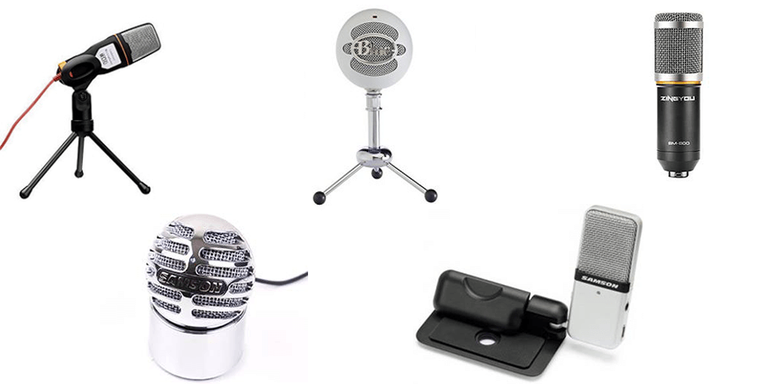 We all want our voice to be heard but sometimes shyness overcomes our ability to speak proudly in public. It happens to even the best of us sometimes but don’t fret, we can always turn to the next best thing which is just as effective if not more: recording audio and putting it on the internet for everybody hear. So, you have your idea in mind about what you want to say, and you want others to hear it so you can start up a dialogue. Unfortunately, you’re strapped for cash so you’re in desperate need of a cheap alternative. Believe it or not, you don’t need to buy a microphone for $1,000 to sound like a late-night talk show host. I’m going to give you a rundown of the top 5 microphones for recording vocals that you can purchase easily and still have plenty of money left over to invest in something else like “Bitcoin.”

This small light microphone is definitely underrated because it provides amazing quality for a MSRP of $16.99. The TONOR condenser microphone is a great substitute for other high-end microphones that are not as affordable because and in many cases it can perform just as well if not better. This microphone is omnidirectional, meaning it can pick up sound from all angles which can come in handy for events such as interviews or podcasts where the cast is set in the same room. Simply place the microphone in the middle of all the guests and it will pick up everybody’s vocals with ease. Another great feature about this microphone is that the 3.5mm audio jack can also connect into audio recorders that can fit into your pocket. It is absolutely perfect for storing and saving audio when you’re on the go and constantly moving around. The plastic/rubbery black handle allows for control and grip to be able to move the microphone when holding it or picking it up.

For an MSRP of $16.99, you get the microphone along with the stand that holds it in place making this quite a deal. There are 2 versions of this microphone that are very similar.

The USB version of the TONOR microphone sees a slight increase of MSRP to $17.99 and is super easy to set up. You simply plug it into your laptop, change the microphone settings and BOOM, you can start recording right away.

The Blue Snowball ICE Condenser Microphone is one of the most popular microphones in the world. Back in 2010, it seemed as if every gaming YouTuber had one of these and they’re still fairly popular and reliable today. I would know because I own one myself. The MSRP is about $58.99 but the price can vary sometimes depending on which model you choose. If you really want this microphone and are somewhat familiar with it, then I would recommend getting a pop filter and an adjustable scissor arm stand or “Boom Arm Stand” as it is sometimes called. The pop filter is a no-brainer, and the Boom Arm Stand is a must have since the headpiece of the microphone has only a slight adjustment. To combat this problem, you would have to put the microphone on a higher surface. The Blue Snowball microphone has a cardioid polar pattern which means you will get the best sound when speaking directly in front and into it so the Blue Snowball is more of a one-man show, but it still delivers great quality for its asking price.

There is a little switch on the back of the headpiece that allows you to change the microphone settings for when you’re in different environments.

Side note, the microphone itself is not super light unlike the TONOR TN12326 so hit the gym before you decide to purchase one of these.

Coming in at an MSRP of $51.93, this microphone is on the smaller side and doesn’t even look or need to be held like a traditional microphone. It’s an amazing little microphone that provides crisp sounding audio without having the need to edit post-production.  This microphone has been thoroughly reviewed online with nearly all positive reviews. It’s definitely worth the money so maybe hold off on buying that new shovel if you want great audio for your next video or podcast. It also comes with a clip, so you can affix it to your laptop screen while live streaming and still have great sounding audio or take it on the go and record at any location you find suitable. The polar pattern for the Samson Go can be changed from omnidirectional to cardioid at the flick of a switch which comes in handy if your recording environment goes through any sort of drastic change. The Samson Go consists of a 3.5mm jack and USB connection on the side which can be plugged into different sources. Just avoid using up both plug-in slots simultaneously because it will cause the microphone to tip and fall over causing an earthquake in the audio.

Now here is a microphone that not only looks professional but sounds professional as well and at $34.98 it won’t break the bank. The ZINGYOU bundle kit is highly recommended because unlike the other microphones previously mentioned, the BM-800 works better with the accessories that come with the kit, whereas the other ones can manage without them. One downside to the BM-800 is that it does not have an omnidirectional polar pattern option. But if you’re trying to make commentary videos, podcasts, or instructional videos for math class, think about giving this microphone a try. The MSRP for the bundle kit on

and comes fully equipped with:

The ZINGYOU BM-800 isn’t as simple as all the other microphones even though it comes with a 3.5mm jack. In order for this microphone to work properly, you need a power source. If your computer’s microphone input doesn’t provide enough power to the BM-800, you will have to invest in a power supply such as the Phantom Power Supply that has an MSRP of $18.99.

Beautiful isn’t it? The Samson Meteorite has to be one of the most adorable microphones I have ever seen but it’s also super sheen and unique looking. The meteorite looking ball is the actual microphone itself and it is magnetically connected to the base so you can tilt it forwards, right, or left without any complications at all. This is the second Samson microphone on our list. They produce great quality audio and look as cool and impressive as the Death Star or in the case of the Samson GO, a communicator from Star Trek. The MSRP for the chrome colored version showcased above goes for only $37.74. Like the other microphones in this comparison, all you need to do is plug the USB cable into your laptop USB port and you’re ready to record. I would recommend a USB extender if you want to have a little more space between you and whatever you plug the microphone into.

I want to be clear that the products in this comparison won’t quite reach the audio quality of a professional $200 studio microphone nor will they necessarily be as durable over long-term usage. Just keep in mind that you get what you pay for, which in this case is an inexpensive, high value, respectable performing microphone. Once you’ve gotten your feet wet and are more familiar/comfortable with microphones, then you can look to upgrade to higher quality alternatives. Now take that money you saved on these microphones and get some vocal coaching lessons to become the next YouTube internet sensation or enjoy a night out at a local brew pub. Their savory craft beers will have you going broke in no time.

Confused about what AV Gear to buy or how to set it up? Join our Exclusive

The UMIK-1 that MiniDSP sells is your best bet as it specifically works with REW.

no, these are for recording voice nearfield only.

Jim Marren posts on April 09, 2018 13:34
Would any of these mic’s be suitable for use with REW?
gene posts on April 09, 2018 02:48
Are You strapped for cash and in desperate need of a cheap but good microphone to do podcasting in hopes of becoming the next late night talk show host or YouTube internet sensation? The following article goes through the top five budget friendly microphones for recording vocals that you can purchase easily and still have plenty of money left over to focus on building your recording studio or taking vocal coaching lessons.